From the lavish lingerie to the star-studded parade of models, the annual Victoria’s Secret runway show is always a extravagant spectacle.

Ahead of Thursday’s show, Victoria’s Secret has unveiled its latest bank-breakingly expensive Fantasy Bra… and let’s just say, it puts our humble t-shirt bras to shame.

Modelled by long-term Victoria’s Secret Angel Elsa Hosk, this year’s highly anticipated creation has been designed by Aterlier Swarovski and is made up of precisely 2,100 diamonds.

The revealing design – complete with a matching diamond body chain – took over 930 hours to create and features 71 carats in the shimmering centrepiece.

And while there’s no denying this glistening show-stopper is a thing of total beauty, there’s a reason it’s been dubbed the “Fantasy Bra”.

Yes, this gorgeous and glistening creation has been valued at a cool a $1 million (£765K)

Describing the moment she tried on the Fantasy Bra as “beyond exciting”, the Swedish model Elsa Hosk told People: “My body was violently shaking.

“And it wasn’t because I was nervous, I was just excited.”

The model – who has been working with the lingerie brand since 2011 – also said the garment is the “most beautiful Fantasy Bra I ever saw.” 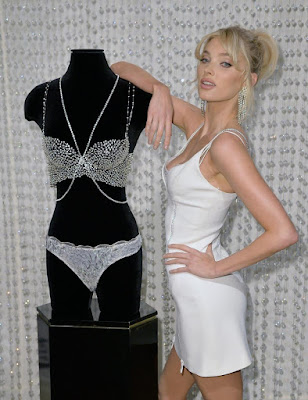 A female foreign journalist has thrown shades at the ruling party, the All Progressives Congress…

Yesterday, we reported that the lady, Stephanie Idolor, who recorded Success’ viral video and posted…