Olakunle Churchill has reacted to the false publication of an alleged judgement by a customary court in Abuja granting his Ex wife, Tonto Dikeh full custody of their son on 3rd of March. He made this reaction after an in-depth investigation through a notice of disclaimer issued by his legal team, stating that there was no court of such or judgment by the alleged customary court.

According to the disclaimer, the alleged false judgement by a customary court in Abuja is false and the publication by a questionable online platform “Cutie Juls” blog as regards the false court judgement was supposedly sponsored by the Actress which is baseless and lacks substantial evidence

Recent Investigations also proved that “Cutie Juls” blog has over time been used and sponsored by Tonto Dikeh to blackmail and promote fake news in view of tarnishing the reputable image of Olakunle Churchill. It revealed that the claims by Tonto Dikeh on the issue of domestic violence, infections and baseless blackmails with reference to an earlier interview video which Tonto Dikeh granted as facts to approve the validity of her claims were misleading.

Senior Associate and head of the the legal team reiterated that the only standing judgement on the custody of their son was the judgement filed at the instance of Actress Tonto on the *11th of October 2017 as suit no. FCT/CC/DU/CV/176/2017*.

[b]The court judgement also ordered that all documents of their son must bear the surname of the ex-husband Olakunle by right and that the international passport of their son must be kept in the bank and shall not be released except a written consent of both parties. But the his ex wife violated the court order by fraudulently obtaining another passport for their son bearing her surname to fly the little boy outside the country. The illegal acquisition of fresh passport for their son was illegitimate and against the consent of the court[/b].

In justification to the discredited reports by the publication, Ace Solicitors has dared the publisher of the fake story to name the particular court and suit number of the case file, if actually the story is verifiable and substantial. He also condemned the disobedience of Actress Tonto as regards the judgement of 31st January 2018, which gave him unconditional access of their son, King Andre.

The Solicitors also counselled Tonto Dikeh to channel her proposition through legal provisions and constitutional pathways rather than sponsoring blackmails against Dr Churchill. 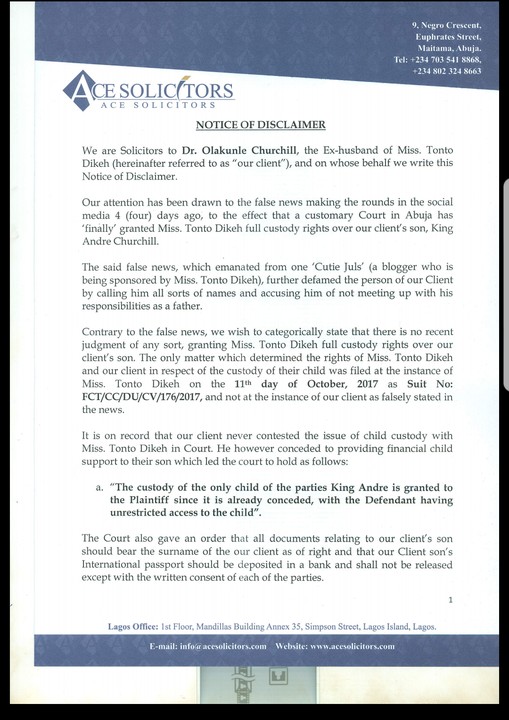 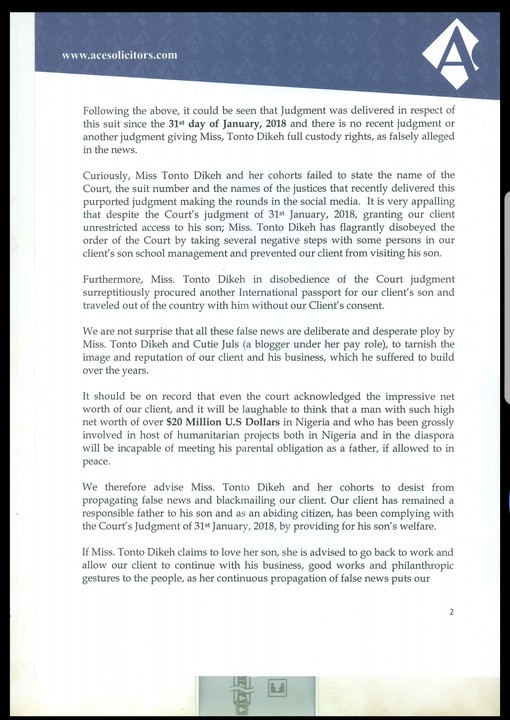 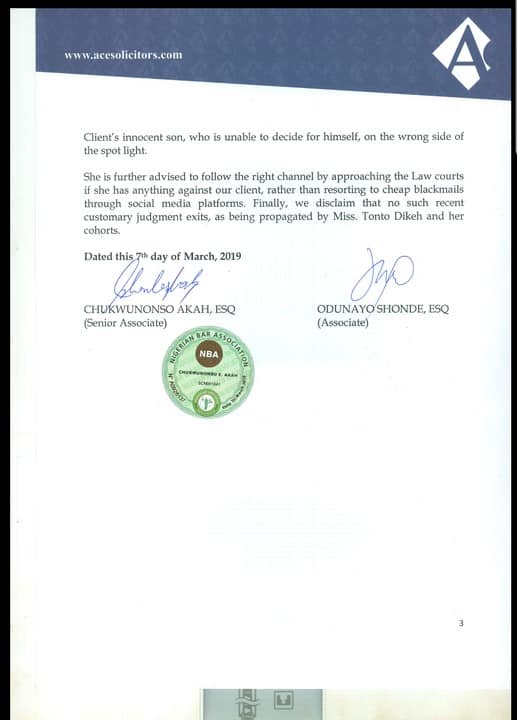 Lovely new photos of actress, Mercy Johnson-Okojie and her family

Actress Mercy Johnson-Okojie shared lovely new photos of herself, her husband, and their four children…

WhatsApp limits users to only 5 text forwards to curb rumours

Uche Jombo in a new tweet questioned the payment of N1.2m to Nigerian senators as…