In the early hours of today, Thursday, January 23rd, 2019, female presidential aspirant, Oby Ezekwesili announced her withdrawal from 2019 presidential race saying she has opted to help build a coalition to defeat the All Progressives Congress and the People’s Democratic Party in the February 16, 2019 election.

As expected, her decision is generating mixed reactions among Nigerians and while many applaud her decision others feel she has just dashed the hopes of Nigeria having a female president at this time.

See some reactions below;

Oby Ezekwesili bows out of Presidential Race, Madam Oby has just destroyed the hopes of Nigeria having a female president

67 people are talking about this

So it’s now that madam Oby Ezekwesili realizes she needs to form a coalition to end PDP/APC dominance?!?!?! Mschew! All of una be jokers!!!

Some people are not just going anywhere and they know this. Nice one Madam Oby.

So Madam Oby is graduating from one self deceit and pipe dream to another, what is forming a coalition that’ll defeat the APC and PDP in next month’s election?

155 people are talking about this

In my heart I knew this was likely going to be Madam Oby’s move all along. It is a very smart and practical move.

1. Draw lots of attention to her beliefs for the country.
2. Step aside (deep down we know she is unlikely to win as it is)…

See The Under_dog’s other Tweets

As a Nigerian who believes that more participation of women in politics will help to strengthen our democracy, the news of Madam Oby withdrawing from the Presidential race is not something to rejoice over.

15 people are talking about this
View image on Twitter 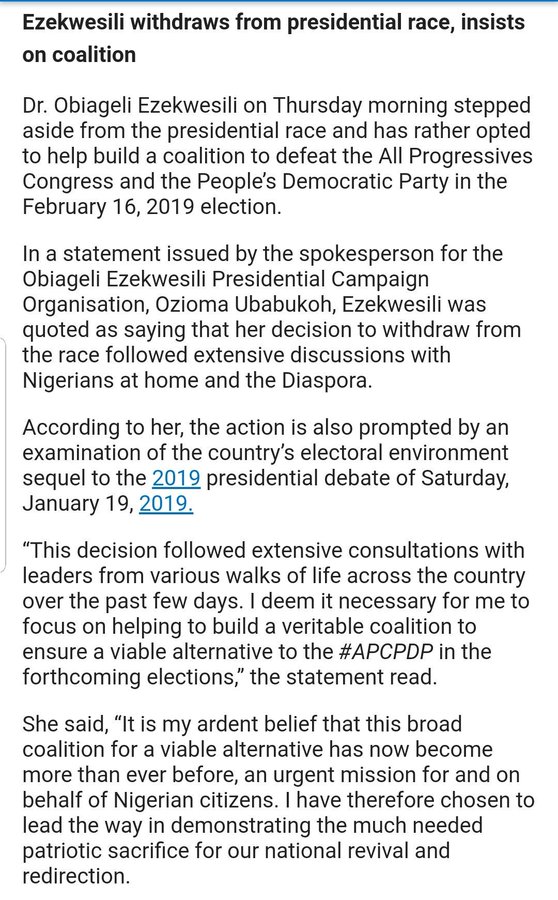 Let me get this; first she was part of a “veritable coalition” to counter #APCPDP through PACT, then a “primary” she oversaw ended in chaos, then she rose to save the day by declaring she wanted to run & now she’s stepping down to “focus on helping to build a veritable coalition” 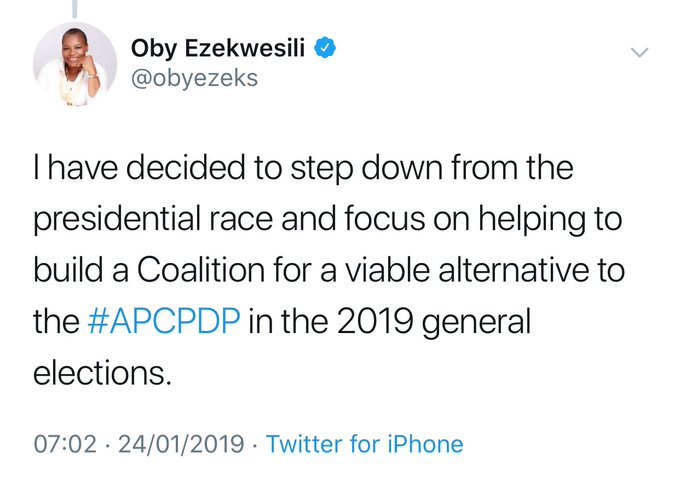 Breaking news: Madam Oby Ezekwesili withdraws from the presidential race to focus forming a coalition for a viable alternative

Everything no be by twitter followers. Good she has tested her strength & popularity on the street to know that she’s overrating herself.

LOL you know when you are laughing but deep down you are actually angry because you know someone was just being wicked, unrealistic and divisive.

You see that confused madam Oby has pulled out of the Presidential race. This should not be a surprise, but a slap on those that actually believed in her at first.

16 people are talking about this

Madam Oby has withdrawn and wants to support a candidate now?

Dear @obyezeks,
The game is the game but I’m here to tell you that we know your game plan 100%.

Thank God that the candidate of PDP, Alhaji Atiku Abubakar didn’t debate with you guys who are buharists in disguise.

48 people are talking about this

Good decision for Madam Oby to step down. Now after the elections ma, sit Moghalu, Fela and any other third force candidate and start planning for 2023 immediately. We need to kick this weird APC devils out of existence. PDP will need a serious opposition to sit up.

21 people are talking about this

Wonder the rhetoric Aisha Yesufu is going to spin now that Madam Oby has dropped out of the race. Whom will she tell the man her husband loaned money to support now.

So sad to see Madam Oby withdraw from the race but I think it’s a smart move, she has no chance at all but this coalition she speaks of should have been done a long time ago.

Nice one Madam Oby, it’s good as she accepted her fate… You can win with another angle, don’t follow crowd..I respect your decision ma’am