The custody battle between Mohammed, son of Former Nigerian Military President, Ibrahim Badamasi Babangida, and his ex-wife Rahma Indimi is still raging on.

This time, Rahma is insiting that her ex manipulated the Sharia court to get custody of their kids. What she wrote via Instagram below.. 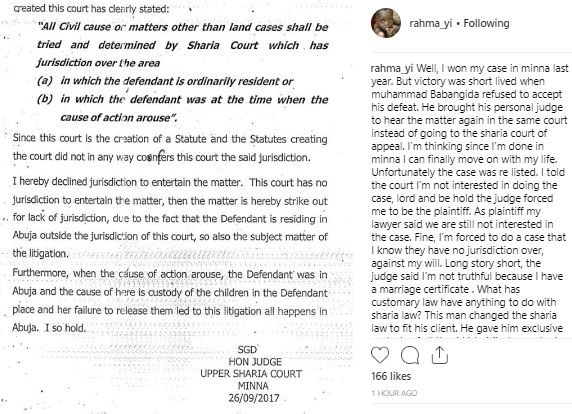 Well, I won my case in minna last year. But victory was short lived when muhammad Babangida refused to accept his defeat. He brought his personal judge to hear the matter again in the same court instead of going to the sharia court of appeal. I’m thinking since I’m done in minna I can finally move on with my life. Unfortunately the case was re listed. I told the court I’m not interested in doing the case, lord and be hold the judge forced me to be the plaintiff.

As plaintiff my lawyer said we are still not interested in the case. Fine, I’m forced to do a case that I know they have no jurisdiction over, against my will. Long story short, the judge said I’m not truthful because I have a marriage certificate.

What has customary law have anything to do with sharia law? This man changed the sharia law to fit his client. He gave him exclusive custody of all the 4 kids. Mind you, sharia gives my mum custody if I’m unfit to mother my children. Even The two that are not within jurisdiction fa. Hey may God help our judiciary wo. Money talks and b***shit works. I will continue to fight till my last breath. Allah Kareem, Allah Wakil.

Sensational Nollywood actress, Ini Edo has over time, been vocal about her love and support for her…

You Were Sleeping With The Pastor, Stupid harlot, you will go to jail – Kemi Olunloyo Slams Iyabo Ojo

Obasanjo fires President Buhari again, says he is sick in his ”body, mind and soul”

Not up to 24 hours after his damning letter to President Buhari, ex-president Olusegun Obasanjo…