President Buhari has in a new interview with CNN’s David Mckenzie, boasted that nobody will unseat him in the upcoming election.

Buhari who expressed confidence in his reelection bid in the interview with CNN’s David Mckenzie, stated that nobody will unseat him as President when asked if he thinks Jonathan’s fate might befall him in tomorrow’s election.

“No, nobody will unseat me,” he replied tersely

The president was also asked if he has stamina for another four years, to which he responded: “Yes, I am ready for it”.

He was also asked about the menace of Boko Haram terrorist in the country, which he responded by stating that they have been weakened. he highlighted that in 2015, the terrorist were holding 17 out of the 774 local government in the country, but dont have any under their control today.

Watch the interview below; 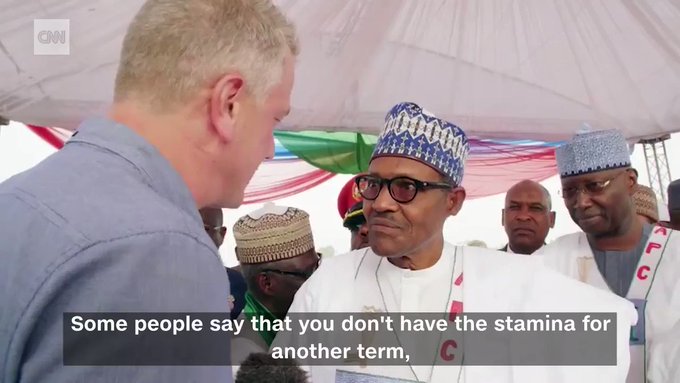 #NigeriaDecides: President Buhari is confident ahead of Saturday’s election. He told CNN’s David Mckenzie @McKenzieCNN “no one would unseat me.”

Heartbroken man shares screenshot of his chat with his unfaithful fiancee, cancels the wedding

Ismail Afeez, a member of the National Union of Road Transport Workers (NURTW) was shot…