A Nigerain lady took to her twitter handle to share the powerful story of how she waited for years before she got pregnant with her daughter, her tumultous pregnancy journey and the miraculous birth of her baby.

Throughout my pregnancy ehh! Lol..
This month pre term Labour, Next month Low Blood, another month no foetal movement and reduced foetal heart beating.. Another month Low blood. At a point hubby and I decided I should just stay in the hospital like that let them monitor me

And on the day of delivery? Another battle was fought and guess what? I WON all..

9months pregnancy Journey and EVERY month I must spend not less than 1week in the hospital.. See this my Reina she is a perfect example that truly God exists. Let me stop here cos im crying RN. pic.twitter.com/m32DJL3aOO 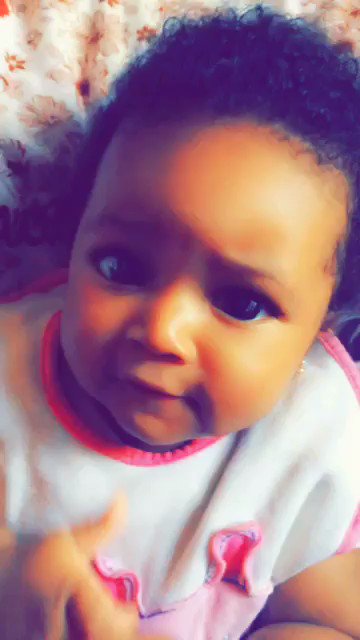 79 people are talking about this

“It’s exactly one year today I found out i was pregnant with Reina and I’m going to tell you guys a little story about that day. See, Hubby and I have been having issues with conception coupled with miscarriages(got pregnant the first few months we decided to try and i lost all Babies,

“2years Later NO conception) and all. We decided to see a Doctor the first year and some tests were carried out including “SCAN” (like what has scan got to do with someone trying to conceive) he assured us that there’s nothing wrong and all. We went home and kept on trying to NO avail.

“Earlier 2017 we decided to call our family doctor(relocated)and we told him we have been to the hospital and they assured us nothing was wrong. He asked to know if we saw a GYNAECOLOGIST and we said no, he became furious and asked why the doctor didn’t refer us to one

“We said “No he did scan and some infection tests” anyway, family doctor now referred us to Garki hospital and gave us the number of the gynea consultant to see. We met him told him same thing we told our family doctor and he had same reaction with the FD.
“Anyway, our journey started, Dr listed out the tests to do and our bill was almost 200k. Meanwhile the previous hospital we paid just 15k.that’s when I stopped blaming the previous Dr and transferred the anger to the Hospital. You know the kind anger a TTC mother has lol.
“Anyway, of all the tests they did, the one that was excruciating was that wicked HSG. Chai! ALL these equipments went straight to my tubes. And yes it’s almost the same pain with Labour pains. (you are welcome) (Google meaning of HSG,i no get strength to explain)

“After the tests, Dr told us everything was fine except high prolactin so he prescribed one tiny drug for me. After taking the drugs(February 2017) the lactating stopped and We tried for 8months no pregnancy. By then the pressure became unbearable.

“We decided to go for IVF met the Dr and he gave us the estimated bill, we signed and decided to start the Journey by January 2018 so that all that hormones injections won’t spoil my Xmas functions. October 2018 I visited an orphanage with my sis and immediately the owner saw me she started speaking in tongues.
“She was like “the lord just revealed to me that you are looking for the fruit of the womb and he said I should tell you a woman from the Village tied your womb, the woman killed a fowl and said i will Never have a child”
“I told her “but i already have a baby na” she said yes that was a mistake because when you got pregnant was before your wedding if not the woman would have killed the baby in my womb” haaa! Come see fear. I started crying and asked her what to do and she said
“Bring your husband and while coming come with a BIG offering to the lord, if possible a CAR. I called chairman with that fear and he told me to start coming home IMMEDIATELY that the woman is a fraud. I told him she said a lot of private things naa chairman just hissed and hung up On me.

“I wasn’t satisfied so i told my Mentor and bellow was our conversation. I was soo scared but i took that fear to God and turned the fear to FAITH.

“11th November we decided to celebrate Alondra’s birthday at the Orphanage.. and after that chairman, his friends and I decided to go out for drinks, i drank away my tears cos my period started on the 1st and just like every other TTC woman, my heart was filled with disappointment
“And pains and the pressure from everyone wasn’t making it easy. A friend even told us to see a traditional Dr and chairman being a hardcore Christian warned the person NEVER to bring such suggestions to us again.
“Every night I won’t sleep, i will cry until Hallelujah challenge starts and i will be crying to God then sleep off by 5am. Anyway crying myself to sleep every Night became a norm Until 25th November 2017. I started feeling painful cramps
“And i felt disappointed again cos cramps meant period which means no pregnancy that month. 26th heavy cramps 27th painful cramps! Ha!

“I decided to get a PT strip, did the urine test and i saw TWO stripes! Hei God! My heart was already pounding.

“I got another one and same 2stripes. Did the urine test 3more times and the results were + by this time i was already in tears, called chairman and he screamed sooo loud eh..He got home and we went to the hospital that same afternoon and I couldn’t control the tears
“When they told us i was pregnant! I cried from the hospital to our house and the first thing we did was kneel down and thankGod! To any woman that is trying to conceive (TTC) don’t lose hope o and do NOT let people’s side talks and family pressure bring you down.
“Pray to your God and while praying see a good gynaecologist. And I know God will surely bless your womb with beautiful and handsome babies

“The battle didn’t end there o.. Here is a screenshot of how I almost lost the baby on the 24th of December.. I was bleeding heavily and devil being devil, hubby went to church and as usual he left his phone in the car.
“We went to the hospital and i was placed on bed Rest and the bleeding was controlled, i was discharged and I thought i have won the war.. not knowing that there were more battles waiting ahead.. lol if i start typing how I fought and won all battles every single month
“Throughout my pregnancy ehh! Lol.. This month pre term Labour, Next month Low Blood, another month no foetal movement and reduced foetal heart beating.. Another month Low blood. At a point hubby and I decided I should just stay in the hospital like that let them monitor me
“And on the day of delivery? Another battle was fought and guess what? I WON all..

“9months pregnancy Journey and EVERY month I must spend not less than 1week in the hospital.. See this my Reina she is a perfect example that truly God exists. Let me stop here cos im crying RN.

EndSARS: Who Ordered The Seizure Of My Passport – #EndSARS Frontliner, Moe Odele To The Nigeria Immigration Service (NIS)

EndSARS frontliner, Moe Odele has fired back at the Nigeria Immigration Service (NIS) over claim…

Comedian, AY replies lady who called him out on Instagram for using an android phone

Nigerian comedian and actor, Ayo Makun AKA Ay took to his Instagram page to share a photo…