A Nigerian doctor identified as Dr Maxvayshia, has shared an amazing testimony of how his cousin recently welcomed a set of twins after several doctors insisted she wasn’t pregnant.

According to Dr Maxvayshia who is a graduate of the University of Benin, many doctors even told his cousin that she was mentally unstable when she kept on insisting she was pregnant.

However, she finally gave birth to a set of wins.

Read the amazing story below as he old it on Twitter:

“So, my cousin missed her period 9 months ago but pregnancy tests read negative all along, all scans done revealed absolutely nothing, even though her abdomen was progressively enlarging and has d size of a typical 9 month gestation.

“14 different Consultants and Professors in over 10 different hospitals between Abuja, Port Harcourt and Lagos talked to her althrough 9 months and convinced her that she couldn’t be pregnant but an abdominal tumour is suspected for which she is to be investigated.

“She was very sure she was pregnant but the counselling of the Obstetricians got her very confused as she was experiencing all the classical symptoms of pregnancy.

“Repeated the scan on the 9th month, still nothing revealed. Even though she was very heavy. She became paranoid and psychiatric evaluation was suggested. She opted out and continued wandering in her confusion, with encouragement from friends and family.

“She recently suddenly went into Labour and was delivered of a set of female non-identical twins through vaginal delivery by a midwife who happened to be there at the time.

“This challenges everything i know as a Doctor and makes me question everything again. If events of d present times and unbelievable miracles do not make you question things you already know and probe deeper in reflection in a bid to know more, then you should reassess yourself.” 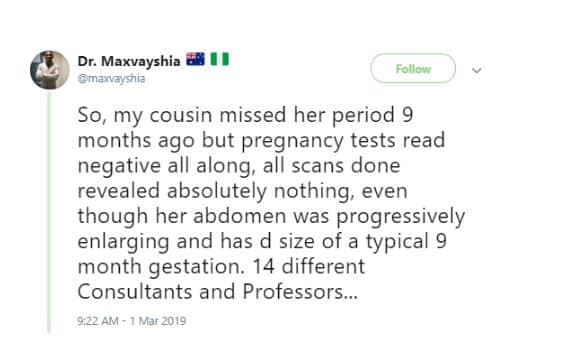 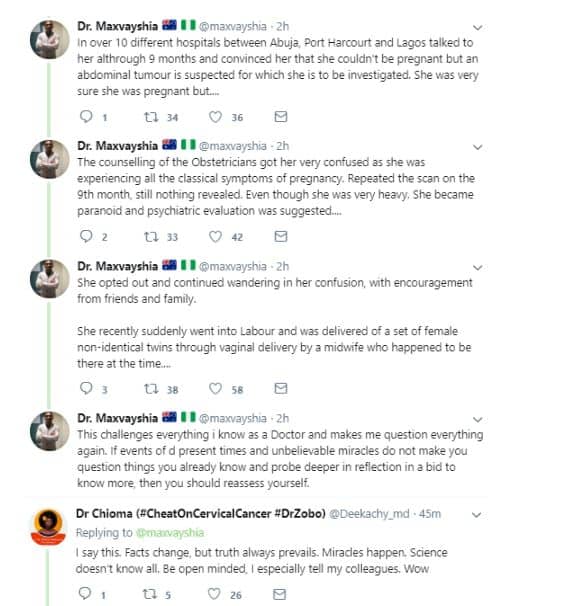 Kylie Jenner has refuted claims that she did plastic surgery to transform her body. The…

Mexican footballer, Jonathan dos Santos who plays as a midfielder for LA Galaxy left many…