It has been reported that a Nigerian Student, Emelife Chinelo Stella, has broken a record after winning a historic 20 Gold medals at the University Of Mysore in India in Masters in Chemistry.

Stella was the Best Graduating Student for Msc from the University of Mysore, India.

According to reports, she graduated with a final grade point (FGP) of 9.263%, Stella received the maximum gold medals from the University, a total of 20 gold medals and five cash prizes at the 99th annual convocation of the university on Sunday.

According to the University of Mysore, this is perhaps the first time in recent years that a foreign student has bagged so many gold medals. 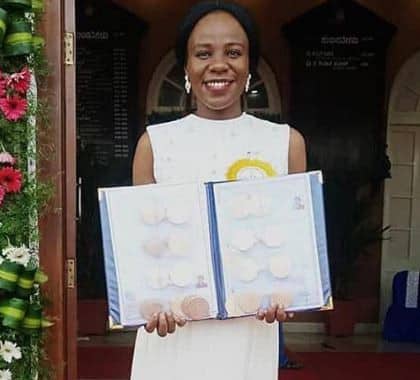 Stella, during her first degree, also graduated the overall best student of Usmanu Danfodiyo University Sokoto, Nigeria, in the 2012/13 set with 4.86 CGPA.

“I want to say that I’m stunned, but everyone who grew up in Sokoto has heard of the Emelife excellency and of its torchbearer, Emelife Stella Chinelo, who has, since her primary school, remained top of her class. What we didn’t know, however, is that after receiving an Indian government scholarship to study in its country, she’d go on to top all of its citizens,” said Stellar’s sister Jennifer Emelife, on Facebook.

The National Agency for The Prohibition of Trafficking In Persons (NAPTIP) have arrested Abubakar Danraka, an Imam…

Passenger takes before and after bus accident selfies (Photos)