Terfa Lord Jirgba, a neighbor of the married woman who killed her husband, Nicholas Adetsav, their three children and herself at their home in Benue state on November 3rd, has given an account of what he saw as one of the first people to get to the home after the murder/suicide. According to him, Mrs Adetsav was well known for her violent behaviour. Read what he wrote below

Makurdi Murders: My Version as a First Responder!

I was one of the first responders at the scene of the terrible tragedy in Makurdi on the 3rd of Nov., 2018., that claimed an entire household.

Ordinarily, I would not have given any account of what I saw on that day because the case is still under investigation and with the scale and magnitude of the matter, it would only be reasonable to wait for the full report of the investigation, but with the way and manner people are giving all kinds of misrepresentations, I felt the compelling need to explain what I saw and fill some missing links in the story.

The events of the preceding days were actually heartbreaking. And to think that a family of five would just perish like that is particularly nerve-wrenching. This heinous crime took place in our neighborhood at Vandeikya street. I have known this family over the years. Nick Adetsav and I are from the same village and we had happened to be close friends long before he finally got married. It may also interest everyone to note that my younger brother Barr. Joseph Tyeku is the next door neighbour to the ill-fated family.

It’s possible for any sound mind to disbelieve the sad event that happened on that tragic day, but the story is as close as the way people are reporting it that the woman did actually kill her husband, 3 kids and herself. The woman truly had had a penchant for violence which the husband did overlook and treated with levity. Fighting had become a daily routine for the couple for whatever reasons that weren’t clear. She was also fond of going to prayer houses. The husband had always tried to manage the situation. As a friend and a regular visitor to the house, I had had cause to scold the wife on several occasions.

Let us be reminded that heaping blame on the late wife stems not out of hatred for her but her previous violent ways.
Before her death, she had a string of cases all bordering on violence and was standing trial at a magistrate court for stabbing a neighbour with a knife. She was mostly to neighbours.

It is truly unclear what had transpired before this ugly incident, but it is a fact that the deceased husband got home at about 6:30 pm having driven himself from a Friday hangout with friends and was immediately confronted by the wife. They both dragged themselves inside the room as usual and locked the door. The routine fights continued immediately and the nieghbours were alerted as usual. But tension rose only when at about 30 to 40 minutes later the woman came outside the compound and smashed at her husband’s car. It became obvious to everyone that all was not well.

My younger brother Tyeku quickly alerted me on phone and I immediately sent D.D. Aernyi’s number to him in order for him to report the incident in hopes his intervention will quell the situation because the deceased husband was his P.A. when he had served as caretaker chairman of Gwer-East L.G. and they still seem to maintain a cordial relationship. And it was reasonable to think his intervention will help calm frayed nerves.

But unfortunately D.D. Aernyi was in Abuja and had instructed my brother to call the police immediately of which he did. When the police got there, which coincided with my arrival, they immediately broke in and discovered that the entire members of the household lay lifeless.

Note that this incident did not occur in the dead of night while everybody was asleep, people were very much awake but only did not reckon the magnitude of what was at hand. Everybody was taken unawares.

It’s indeed highly pathetic and too tragic for words. And it is a big pity that the watching world which was wide-wake could not help the hapless victims. 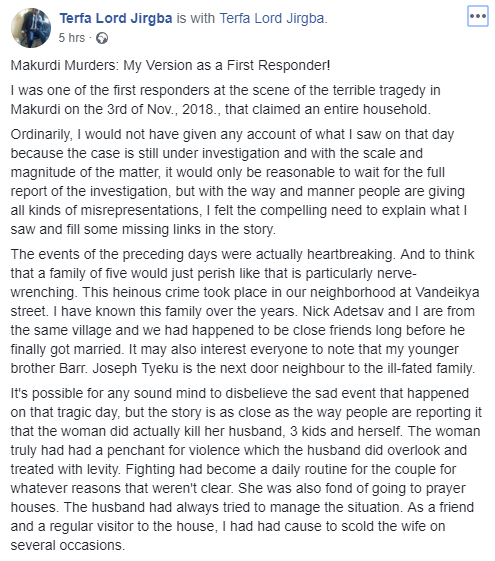 Neighbor of lady who killed her hubbythree children and herself in Benue gives his account; says woman was known for being violent
Share This
Related Posts

Convener of the Concerned Nigerians group, Deji Adeyanju has reportedly been arrested by officers with the Nigeria…

Nigerian lady stranded after her date ditches her with N83k bill