A Twitter user identified as @makingcheddah, has started an argument on the platform after he stated that bad girls end up with the men while good girls remain single.

Sharing a photo of her flaunting her ring while looking lovingly into the eyes of her fiance, @makingcheddah wrote:

“Mia Khalifa got engaged. Seeee being a good girl takes you no where. Good things happen to bad girls.” 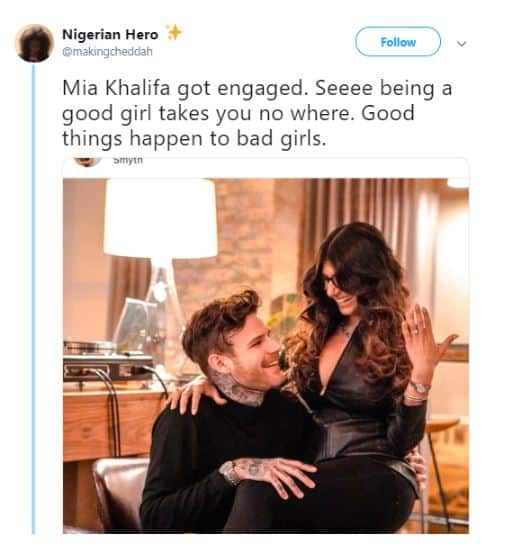 I tweeted something about this yesterday. I’m starting to believe men actually love bad girls than good girls. I’m a man so take it from me. Every man wants more than he can chew if we are being real. Notice how a man says he wants a God fearing chick and still chase after hoes?

Do you ever sit and wonder why all your hoe friends are married/in a loving relationship right now and you’re not? Well the answer is because she’s a hoe. Be a hoe today. You’re welcome. 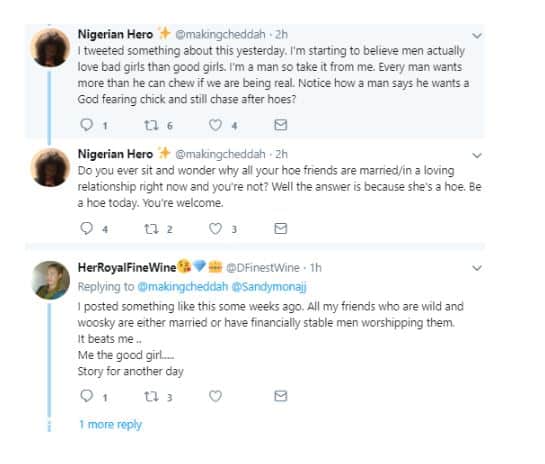 “I blew before Wizkid” – Danny Young berates OAP for misinformation

Nigerian singer, Danny Young is claiming he ‘blew’ before Wizkid and so the Star Boy should not be considered…