Empress Njamah seems to have finally reacted to a viral interview made by her ex-boyfriend, Timaya on why he collected his car gift from her after they broke up.
During a recent sit-down with Daddy Freeze of CoolFM, Timaya revealed why he collected his car gift from her saying, ‘before we broke up, she wanted me to get her a Murano, I gave her money to get the car. Then, a girl bought me a Honda Pilot for my birthday, just a fan. Empress took the car and was driving it, but she didn’t know it was a gift.’

Then, we broke up, he continued, adding that the actress didn’t actually buy the car with the money he had previously given her.

The details made public by him have prompted a reaction from Empress who wrote, ‘maturity comes when you stop making excuses and start making changes! Fake people have an image to maintain, real people just don’t care’. 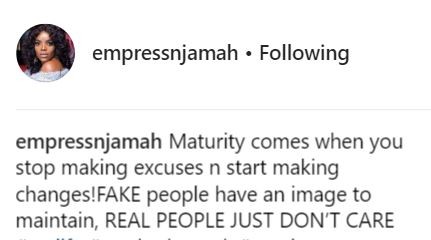 American R&B singer, Ne-Yo, has reportedly broken up with his wife Crystal Smith after four-years of marriage. According…

Nollywood actress and producer, Eniola Badmus has taken to social media to narrate her near…