Ese Walter and radio host Benny Ark have separated after being married for 5 years.

Ese Walter explained that she separated from her husband because being married made her compromise even to her own discomfort. She said she felt choked, lonely, and sometimes didn’t want to see her husband so much in a week.

“How can you feel lonely when you have a live-in partner?” she added as she spoke about her separation.

However, she said she’s been looking and feeling better since separating from her husband. She also said the separation has brought her and Benny Ark closer.

“Ese you look a lot better since the separation…”

At least three people have messaged me with the same content said differently and I thought to respond about that comment.

I look a lot better than I did since coming out about the separation.

I think the first reason is because I no longer have to pretend or use silence to keep the truth of the separation.

Another thing is, while married, I felt I had to be certain ways. Sometimes, many times, I compromised even to my own discomfort.

The people pleasing part of me came out fully in marriage. I didn’t trust myself, let alone Boobdaddy. I didn’t know what a family was supposed to be and I had times where I didn’t feel like Boobdaddy and I were family. It was like there is me and this child I birth, then there’s this man responsible for the pregnancy whom is called husband and we are somehow supposed to live in this four cornered space…. forever?

I could never admit that I didn’t get that. And worse, didn’t want it. Why did I feel choked sometimes? Surely I was the only married woman who didn’t want to see her dear husband so much in a week.

I had to pretend and swallow all of these things I considered weird and wrong of me.

Now… I live alone with my compulsory tenants (Boobies. That’s short for Boobbabies ? )

Being in this space where I can be me. Whatever that means to me, and the many changes that will rise, without worrying about pleasing another person outside myself, is very freeing. Selfish too. (I am a selfish woman)

It gets lonely sometimes but at least this lonely makes sense. The type of lonely I used to experience didn’t make sense. How can you feel lonely when you have a live-in partner?

So yes, I do look better and that’s because I FEEL better about Ese. And I no longer have to hide my uncomfortable truths.

It also helps that Boobdaddy and I have been able to build friendship. We used to be good friends before marriage tried to scatter the friendship?

We ditched the marriage and kept the friendship. And family ??

I am happy and content on the inside. This shows on the outside as “looking better.”

Plus, I have activated my vampirism genes. I’m done aging as we know it ? 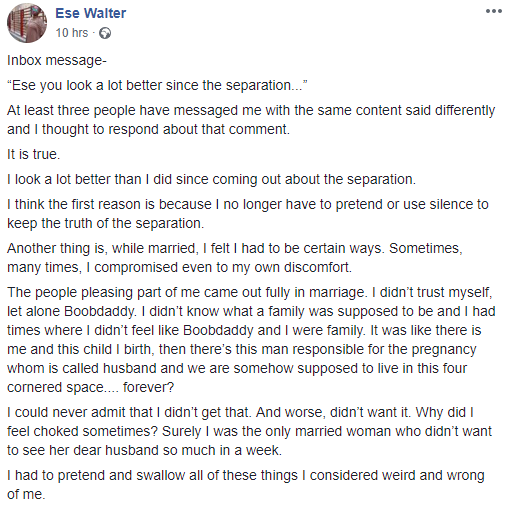 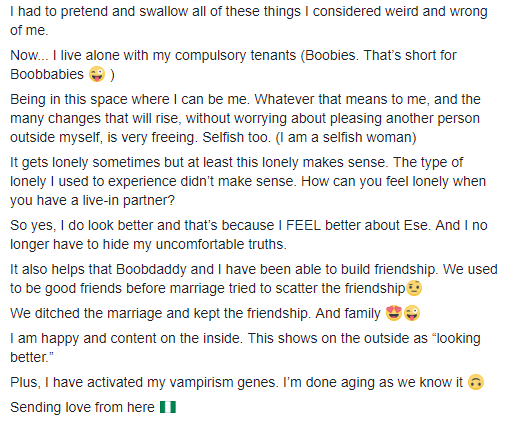 Ese Walter and Benny Ark separate after 5 years of marriage; says she looks "a lot better" following the separation
Share This
Related Posts

Popular Enterpreneur, Kylie Jenner has finally reacted after she was dethroned by ‘an egg’ for…

Gospel singers, Eben and wife, Jahdiel are celebrating their wedding anniversary today. They took to…

South African socialite and dancer, Zodwa Wabantu, who is popularly known for dancing without her underwears…