A young couple have been arrested in Iran over a romantic proposal in a shopping mall, which authorities say “offended Islam”.

A video of the romantic public proposal went viral and the couple at the centre of the video were arrested for offending Islamic principles with.

The proposal took place in a central Iran shopping mall in the city of Arak. The footage shows the man proposing as he and his girlfriend stood inside a heart shape made by arranging red petals on the floor. They were surrounded by red and white balloons as the man proposed and the woman accepted.

A crowd of onlookers cheered and applauded after the surprised woman accepted the proposal. The man then slipped a ring on her finger and they shared a hug.

Shortly after the video went viral, Islamic Republic News Agency journalist Sobhan Hassanvand tweeted the video, writing that both were arrested for a marriage proposal in contravention of Islamic principles.

The public proposal had drawn the reaction from authorities because it was based on “decadent” Western culture, according to Hassanvand’s post. He added that the pair were later released on bail.

Public displays of affection are prohibited in Iran’s strict Islamic laws, which also forbid gender mixing in public places. Relationships between Western and Muslim people in Iran are also forbidden.

Watch the video below. 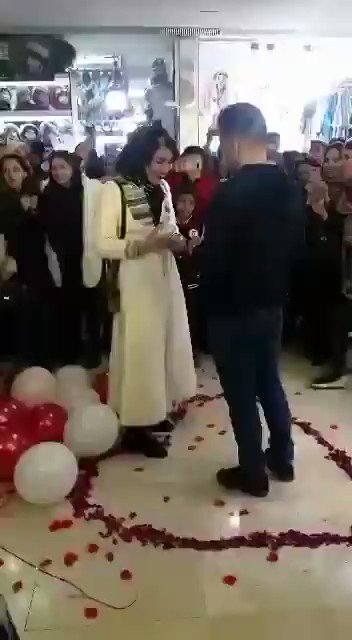 Man publicly proposes to woman at shopping mall in Arak, central #Iran
Both arrested for “marriage proposal in contradiction to islamic rituals… based on decadent Western culture,” then released on bail

1,790 people are talking about this
Twitter Ads info and privacy
Couple arrested in Iran over romantic shopping mall proposal because it ‘offended Islam’ (video)
Share This
Related Posts

Former Big Brother Naija housemate, Tboss, who turned 35 over the weekend took to Instagram to…

Actor Emmanuel Ikubese And Wife, Anita Adetoye Trigger Breakup Rumour After Deleting Their Wedding Photos And Unfollowing Each Other