The 16-year-old son of a Bishop has wedded his 15-year-old girlfriend traditionally and they are set to have a church wedding next month.

The teenage couple held their traditional ceremony on Saturday, March 9, 2019, in Nkandla, KZN, South Africa. The church wedding comes up on April 13.

The boy, identified as Siyacela Dlamuka, said he was looking forward to making Thando Mathebula his wife officially.

I can’t wait to officially call her my wife. 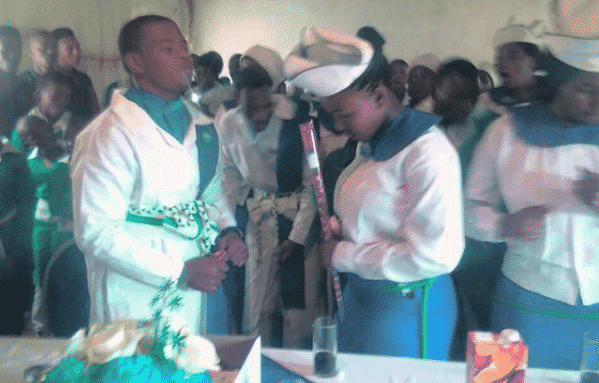 On the issue of kids, he said they aren’t planning on having kids just yet. He added that they want to complete the necessary stages of their formal education before they expand their family.

His father, Mthandeni Dlamika, 59, a bishop of the Corinthians Apostolic Church in Zion, said he fully supports the underage marriage.

These days, you find teenagers engaging in sexual activities secretly and most of the time, they end up falling pregnant out of wedlock.

When his son told him he had fallen in love, Siyacela’s father took it upon himself to pay for dowry and other expenses so Siyacela could focus on school.

The only rule I made is that they wait until they’re officially married before engaging in sexual activities.

That was the rule I made for my daughters, who are all married now.

Giving an update via his Twitter handle last night, the governor disclosed he has recovered…

Students are being paid to be infected with dangerous tropical diseases in the U.K

Cash strapped university students are being paid as much as £3,500 to be infected with…